The facility, originally constructed in 1985 and expanded in 1999, was also in need of updates and improvements to replace aging infrastructure. The improvements included upgrades to the entire chemical system with new chemical pumps, piping, and tanks. Both the expansion and improvement projects included extensive electrical work and upgrades with the replacement of the plant’s main motor control centers (MCCs) and the addition and replacement of 1250 kw and 350 kw generators. McCarthy Building Companies self-performed the concrete (6,500 total cubic yards), civil/earthwork, yard piping (7,512 LF of pipe), process pipe and equipment installation, HVAC, and plumbing scopes of work.

Prior to the commissioning and startup of the new Train 4, issues at the existing Trains 1-3 caused several filters to have to be placed offline. These issues impacted the production of water at the plant and, after further investigation, it was clear that the filters in Trains 1-3 needed to be replaced. The team was able to quickly adjust and focus on getting Train 4 online and commissioned a couple months early and help the plant get back to the required production levels. The early commissioning and startup of Train 4 allowed for the flexibility to phase the filter replacement in Trains 1-3 to not impact the water demands in both communities.

Construction management at-risk (CMAR) was the selected delivery method for the project as the project needed a team that could work together to work through and solve issues during the design and throughout the construction of the project.

The team’s open communication led to significant value engineering and design enhancements. Design enhancements represent a team effort between the contractor, engineer, plant staff, and owners and evolve during construction when the team finds a better design or encounters unknown conflicts or issues that have an impact on the design.

Some of the more notable design enhancements at Pyramid Peak included the replacement of all the chemical pumps (22 total for polymer, aluminum, fluoride, ferric, and sodium), modifications to the headworks bypass channel due to an existing electrical duct bank conflict, and access to the backwash channels that previously did not have any access.

Early on during construction an existing unknown electrical duct bank was discovered in conflict with the new headworks bypass channel. As a community supplier of water, Pyramid Peak WTP could not afford to be offline and relocating the duct bank would have resulted in significant schedule and cost impacts to the plant. So the team decided relocation was not an option. McCarthy and Black & Veatch worked together to provide a design enhancement that would not impact plant operations nor compromise the design intent. Through an unprecedented amount of research and open communication, the conflict was avoided without relocation resulting in a savings of more than $200,000.

Additionally, the project team was aware of the owners’ preference of utilizing divers for operations and maintenance work within the treatment trains. With this knowledge acquired through collaboration and listening to the owners, McCarthy and Black & Veatch were able to design and construct two entrances to the backwash channel for divers to have enhanced access capabilities at the water treatment plant.

Knowing there would be challenges ahead working on an operational plant, the entire project team came together to set expectations and align goals prior to the start of construction. By breaking that ice and establishing the team mentality early on, all parties—the Cities of Glendale and Peoria, Black & Veatch, and McCarthy—became flexible and willing to focus on the end goal through each challenge.

The Pyramid Peak Water Treatment Plant remained online and active throughout construction. As one of the key water treatment plants for the growing Northwest Valley, maintaining operational functionality was essential. The original project scope included a new treatment train with five new filters. Just as the project team was hitting the final stretch toward completion, several of the 14 existing filters showed signs of failure. With this discovery, and because they were ahead of schedule, the project team was able to complete the new train two months early. The five new filters couldn’t have come at a better time, as five existing filters failed about the same time the new filters became operational.

The focus, buy-in, and coordination of the entire team and design enhancements all provided a domino effect for the project’s success throughout the life of the project. The cost savings provided back to the owners allowed the cities of Glendale and Peoria to replace the five failed filters and ultimately replace all 14 existing filters on site—none of which were part of the original scope. Ultimately, the new treatment train and 14 replacement filters were completed within the original budget and project schedule, an incredible accomplishment by the project team.

“When opportunities to provide a better product for the owner surface, the project team relies on everyone’s collective expertise to determine the best solution possible that makes sense not only as an enhancement, but one that is financially sustainable. This project could be declared a ‘model’ project in terms of teamwork and communication. The proactiveness of the entire team in producing an outstanding final product will serve the citizens of Peoria and Glendale well for decades to come.”
—Dallas Sweet, PE, Senior Field Engineering Manager, Black & Veatch

“In working with a diverse group—including two owners, multiple consultants, operations staff, CMAR, as well as considering multiple funding sources—the entire group must partner to openly and honestly provide alternatives to design (or construction) issues that may arise. All discussed the alternatives’ impact on operability, schedule, and costs. The duct bank solution is a testament of the exemplary team collaboration to provide the best solution for the plant and future operations which serve citizens of both Glendale and Peoria.”
—Tom Kaczmarowski, PE, Principal Engineer and Project Manager, City of Glendale

“The entire Pyramid Peak project team remained open to discussing ideas to execute the work more efficiently or brainstorm opportunities to start activities early to get ahead of schedule. I can tell that everyone at that site enjoys coming to work because of the cooperation and synergies of the entire team.”
— Chris Anvik, Senior Vice President of Operations, McCarthy Building Companies —Water Business Unit

“As growth continues in Peoria, staff recognized the need to work with the City of Glendale to expand the PPWTP to meet new demands. This water is part of Peoria’s CAP allocation and will be moved through the system primarily into the Vistancia area, as well as other parts of north Peoria. This will allow for increased growth and water system redundancy.”
—Cape Powers, Water Services Director, City of Peoria 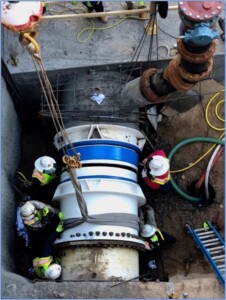 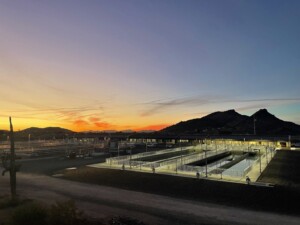 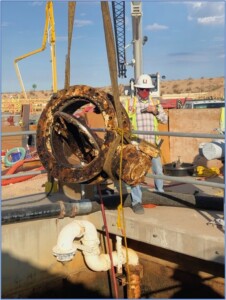