When regulators notified the City of Emporia that more stringent treatment requirements would be included in the City’s next permit revision, officials knew they would need to make a change to their aging wastewater treatment plant. To address both the aging infrastructure and the need to provide additional capacity, a significant capital investment would be required.

Burns & McDonnell and CAS Constructors—an Alberici Enterprise—provided the City of Emporia an integrated design-build team for the implementation of improvements necessary for the impending discharge permit requirements for effluent nitrogen (10.0 mg/L) and phosphorous (1.0 mg/L).

With financial limitations prohibiting the creation of a new facility, a design-build delivery approach and alternative technology would allow Emporia to reuse as much of the existing infrastructure as possible. This approach was chosen because it provided a single point of accountability, allowed collaboration with the City, and reduced overall project cost and delivery time. In addition, the City was provided financial guidance as well as assistance in obtaining funding via the Kansas State Revolving Loan Fund (SRF).

The integrated design-build team worked collaboratively to provide improvements to meet the impending discharge permit requirements, including those for effluent nitrogen (10 mg/L) and phosphorus (1.0 mg/L). The innovative technology utilized is based on an Integrated Fixed-Film Activated Sludge (IFAS) process. It’s the first of its kind in Kansas, but one of more than six similar installations that Burns & McDonnell has implemented across the nation for biological nutrient removal (BNR).

The approach was selected to ease installation in the existing aeration basin, effectively eliminating the need to build separate anaerobic/anoxic basins for nutrient reduction. In addition to meeting the nutrient reduction objectives, facility improvements also include the treatment of wet weather flow up to 11 million gallons per day (mgd), streamlined
operations and solids handling, and reduced energy costs in conjunction with a reliable supply of power, and a new laboratory, office and administrative space.

Improvements to the wastewater treatment plant were completed on time, allowing the City of Emporia to meet its new permit obligations. Based on the IFAS technology process that was implemented, the City was able to save over $1 million in project costs. In addition, plant operators have an updated control system and better tools for process optimization.

“The team brought forward an innovative fixed-film treatment process that allowed us to repurpose existing infrastructure, significantly reducing project costs and schedule.
The partnership and high level of dialogue that exists between the City and the Burns & McDonnell/CAS Constructors—an Alberici Enterprise—team is delivering results
that the City is proud of.”
—Frank Abart, Former Public Works Director, City of Emporia 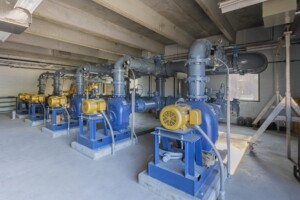 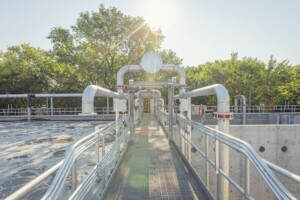 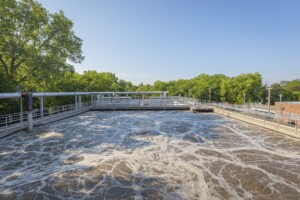 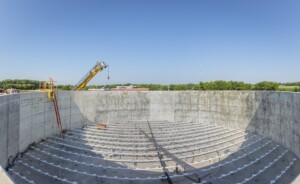