The CSX Camden Street Storm Drain Replacement was a technically complex, design-build project located in a heavily traveled section of downtown Baltimore, Maryland, just steps from Oriole Park at Camden Yards and the Baltimore Convention Center. The project consisted of replacing a 48-inch-diameter brick storm drain, originally built in 1891, that crosses directly under the CSX railroad tracks in the Howard Street Tunnel.

To achieve the 19-foot-4-inch vertical clearance required to run tri-level autorack railcars through the Howard Street Tunnel, the track was lowered approximately one foot in the early 1990s. In doing so, the Camden Street storm drain became an obstruction. Contractors working on the project removed the top of the storm drain at the spring line, replacing it with steel plates. Their solution allowed the railroad to achieve the desired vertical clearance but was a detriment to tunnel maintenance and operations. Once rare, flooding in the Howard Street Tunnel has become increasingly more persistent in recent years. Factors such as increased development upstream, leaking city water lines, and debris collecting in the storm drain downstream caused the tunnel to flood—even during relatively benign storm events—as much as 20 times per year.

The increase in storms and high tides impacted train operations, at times suspending activity until the water receded, the track was inspected, and any necessary repairs were made. With the Howard Street Tunnel situated on CSX’s crucial mainline I-95 corridor between New York and Florida, and supporting approximately 30 freight trains per day, the costs associated with flood-induced delays and maintenance were substantial.

As the costs increased and CSX looked at further track lowering in the tunnel to accommodate double stack intermodal freight traffic, they determined a complete replacement of the original storm drain was necessary. For this project, it was crucial that the CSX freight rail and the adjacent MTA light rail remained operational and undisturbed throughout construction of the storm drain replacement.

Design-build delivery leveraged innovative design and construction solutions to the technical and constructability challenges of the project, allowing for an aggressive design and construction schedule. Due to the project’s complex technical nature, CSX evaluated design-builders on their extensive and proven ability to offer creative solutions for successfully executing projects in a dense urban environment and around active rail operations. The design-builder was selected, in part, based on their ability to detail a solution that would permit work to move forward without an impact to CSX freight rail and MTA’s light rail operations, while minimizing construction and long-term operation and maintenance cost.

To solve the project-specific challenges, Clark Construction Group and its Water Division designed and built a new 60-inch storm drain, installing it along with a gravity siphon system approximately 10 feet below the existing track level. In addition, they excavated shafts on both sides of the existing tunnel to install three new storm drains from the Camden Street Shaft. With the new storm drain system, the Camden Street Shaft takes storm water from the existing storm drain network west of the tunnel and the new Howard Street Tunnel inlet structure, channels the flow under the tunnel to the Howard Street Transition Structure, and discharges it back into the existing 48-inch storm drain.

The new inlet structure was constructed next to active CSX train tracks in the Howard Street Tunnel, requiring inlet installation to occur within work windows scheduled between train movements. During the design phase, it was determined that CSX would not be able to create work windows to allow Clark to get the necessary equipment in and out of the tunnel in time to construct the inlet between active train routes. Working closely with the owner, the design-build team engineered a solution that involved constructing the base of the inlet structure from inside of the 48-inch-diameter, hand-mined tunnel to minimize the impacts of working between active trains. Their early recognition of the problem and innovative engineering solution reduced the project schedule.

The project also involved constructing two hand-mined tunnels under two operational railroads, as well as jacking a micro- tunnel boring machine over 150 feet and hitting a receiving collar with only two inches of tolerance. The project required excavating 25 feet below the groundwater table. Before excavation began, the design-build team needed to resolve the challenge of excavating without flooding the project site. After exploring multiple options, they selected a chemical grout curtain solution to minimize the risk of tunnel flooding that allowed the team to overcome the challenge of working below the groundwater table with localized sump pumps.

Even with the project’s highly technical and sensitive nature, Clark completed the Camden Street Storm Drain Replacement safely, on schedule, and on budget in April 2019. The result was a complex design that was developed in a very efficient manner by leveraging the benefits of the design-build model. For this innovative project Clark Construction won the 2020 DBIA Mid-Atlantic Award for Excellence in Engineering. The team accounted for current rail operations by ensuring the project’s mission-critical pump station had multiple layers of operation redundancy and also planned for the future—with knowledge that the tunnel would be further modified to support double stack intermodal freight operations—and with climate resiliency in mind, Clark’s design solution accounted for the tunnel’s future maintenance and operational needs.

The project’s largest design challenges were field-driven,due to needing to react to the very complex site conditions. The entire team understood that communication, teamwork, and timely issue resolution were paramount to the project’s success. Executing this technically complex project around two active railroads was not for the faint of heart. A high level of transparency and open lines of communication among project stakeholders, including the surrounding community, helped solidify alignment between the design and construction schedules throughout the life of the project.

Clark held online weekly meetings with local CSX staff and monthly face-to-face meetings with the designer and regional CSX leadership to ensure alignment around the design as it progressed and around proposed design solutions. Clark held weekly site walks, and each monthly meeting was followed by a site walk with CSX and the designer to review job progress. Community stakeholders were engaged from the project’s outset and received regular updates throughout the construction process. Representatives from each entity also attended in-person meetings when planned work had the potential to impact their respective assets. These pre-activity meetings were a critical part of Clark’s start-up planning for each new aspect of the work.

During the project’s most crucial stages, key members of the client and design-build team co-located on site to foster more efficient decision making and coordinate CSX resources and network access to ensure critical project elements could be completed seamlessly with active rail operations.

“By utilizing a design-build project delivery method, the project team was able to operate on an unprecedented level of collaboration throughout the life cycle of the project. Every day, it was clear that the design-build team had a singular goal to provide certainty of outcome to CSX on the commitments made to successfully deliver this project. The design-build team addressed these complexities with professionalism, through collaboration, and utilizing a problem-solving customer-service approach that led to the completion of the project on time and on budget.”
—Brandon Knapp, PE, Project Manager, CSX Transportation 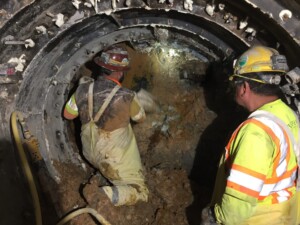 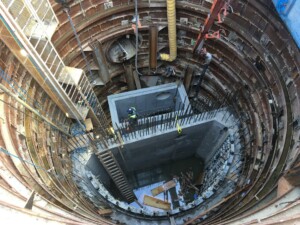 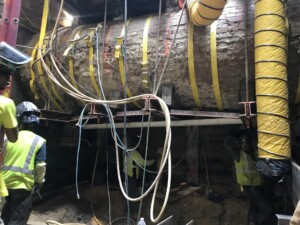 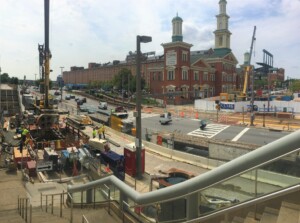