To serve a growing population in an area often stricken by drought, San Diego County Water Authority (SDCWA) began investigating the potential for a desalination project along the county’s coastline, eventually identifying the Carlsbad site due to the existing seawater intake and discharge infrastructure (serving Encina Power Station), as well as proximity to the regional distribution system. SDCWA then engaged developer Poseidon Water to design and construct a plant and conveyance pipeline as part of a 30-year Water Purchase Agreement for up to 56,000 acre-feet per year—or approx. 18.25 billion gallons.

The KSD and Arcadis team added value during each phase of the project—from fostering a collaborative team environment and co-locating key team members during the design and construction phases of the project to continually challenging the “status quo” design or construction approaches. Each team member delivered added value elements based on the unique experience and expertise that they possessed.

When completed in December 2015, the $592 million Claude “Bud” Lewis Carlsbad Desalination Plant became the largest seawater reverse osmosis (SWRO) desalination plant in the Western Hemisphere, taking in up to 108 million gallons per day (mgd) of seawater to produce up to 54 mgd of drinking water. Reverse osmosis membrane technology provides a drought-proof core water supply that, blended with water from other sources, can serve up to 400,000 residents. Seen as the harbinger of a new era, the plant supplies approximately 10% of the region’s water needs, exceeding SDCWA’s goal of 7% by 2020.

It has won numerous awards including a 2017 Grand Award from American Council of Engineering Companies (ACEC), 2016 Project of the Year and National Award of Excellence from Design-Build Institute of America (DBIA), 2016 Desalination Plant of the Year from Global Water Intelligence, and the San Diego County Taxpayers Association’s highest honor, the Grand Golden Watchdog. 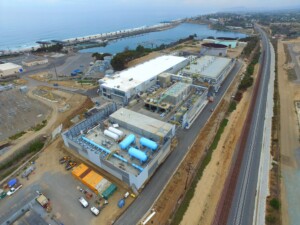 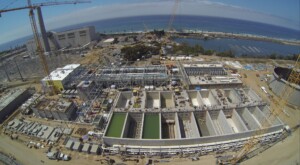 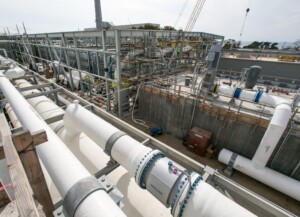